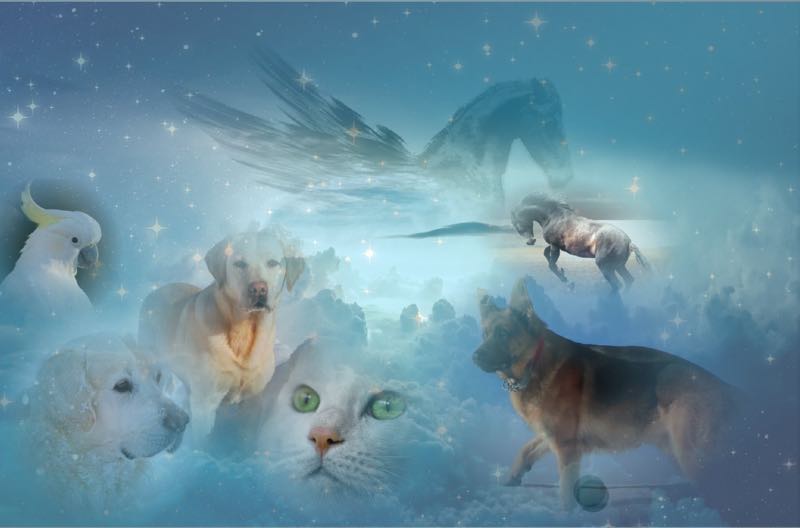 Everything I know about reincarnation and death I learned through talking with the animals.

Through many different sessions, with many different animals we’ve discussed the idea of death (they refer to it as transitioning), life and reincarnation, and I think it’s time I shared it with you.

Here are some answers to some of the more “popular” questions I’ve been asked over the years.

1 Do animals reincarnate? The answer is yes, they do in fact we ALL do. And over the last 6 years I’ve noticed an immense increase of animal reincarnations, some of these have been animals who come back to the same person they left because they believe that there is still work to be done with them.

2.  Why are they reincarnating? Here’s the more involved answer: Before 6 years ago, I would have perhaps had one or maybe 2 reincarnations from my animal clients a year. Today, I have lost count at how many animals are coming back into other bodies but back to the people they had before.  It began to change with the vibrational shift of consciousness that we are currently experiencing began to grow and strengthen. The energies and vibrations of this planet and the planets around us and beyond are being raised up higher and higher as more and more people and animals are raising their personal energies though connection with Divinity, Star People, Angels, Guides, dreams and astral travel. The more you raise your vibration the more the vibrations of those things and beings around you begin to raise as well. We are leaving behind the thoughts, ideals and actions of the old and bringing back the “magic” that once was. The animals know this and they know that this is a very exciting time and they want to be a part of helping to bring the energies of this world bigger, better and raised higher, they refer to it as a “calling” and this calling is usually to come back to those they left so they can experience it in a new body with the ones they love. Some animals feel this “calling” but stay on the higher planes of Non-Physical (Heaven) to do their work from there because they are more powerful there. Ordinary people, animals light workers, creatives, spiritual leaders, and uplifters, everyone, is being asked to raise their vibrations to meet the rising wave of the changing Universe, and many are. But the animals see that there are many who are not. they are lost and need help and they want to come back to help as many of them as possible, for the wave will only get stronger and for those who don’t raise their vibrations to ride it will consumed by it.

3. Do animals reincarnate as people and vise versa? Again the answer to this question is yes but not always. I’ve had sessions with animals who were human in a past life, and humans who have been animals in theirs and then there are the souls who want to experience their lives over and over again as the same species. It really is about what kind of experience on Earth the soul would like to have, some souls want to know what it’s like to live life as both human, and animal, some want to stay a specific type (or breed) of animal for many lifetimes, some want to change it up and live life as different wild or domesticated animals. Some souls stay human lifetime after life time and some animals never change. It’s always up to the individual soul.

4. Can souls inhabit a body that is already being inhabited by another? Yes, and many people have experienced it, maybe even yourself. It is usually happening when a person or animal “suddenly changes” they way they talk, move or act. They will seemly become someone else, for example your dog does something or acts like another animal you’ve lost or a relative or friend who has passed on. Souls are limitless, they can move from one body to another effortlessly one soul either moves out or moves to the back the let another come forth. This gives the soul of the transitioned a chance to be back in the physical world to relay a message, or to bring comfort to their people. The dame could be said for souls that come in to inhabit a body that is already inhabited by another soul. The soul of the being already here; either moves out permanently to new body or goes back to Non-Physical to live or to wait for their body to be ready or born. Souls have contracts that we arrange when we’re “back home” in Non-Physical. The contracts can be about who’s the mother or the child, the dog or the cat, the brother or the sister and it can also be about which soul comes in first resides in a body, for how long and what happens when the second soul comes in for their turn. Contracts are agreements that are made for that being’s life experience here on Earth. They are also about how long a soul will be on this plane before they transition.

5. How do animals view “death”? The majority of animals do not see death (or transitioning) as we humans do, they see it simply as exchanging energy that moves from one place to another, the energy still exists, nothing can destroy it but it’s not in a physical body anymore. Because of this they are not as attached to the physical as humans are, they see spirits easily and don’t quite understand how we don’t. It’s simply a “matter of tuning yourself to the spirit’s frequency in order to see it. Animals taught me that the lives that we all live here help us to become better souls in Non-Physical. that when any being steps through the doors their experiences here on earth help their souls to develop, to grow to expand and become more and because of that Non-Physical itself becomes even better; that with each soul that returns it transforms it something even more magnificent. If no souls came down here (if we all stayed in Non-Physical) where everything is perfect and manifests as soon as it is asked for, then Non-Physical would eventually stop growing, becoming stagnant and eventually dying. The animals taught me that good, bad or ugly the life that is lived here means something that it all works to make our souls home in Non-physcial a better place. Armed with this knowledge animals do do fear death as humans do, the embrace it, they celebrate it and they see that no matter what kind of life they live here on Earth that every single one of them does it’s part to make this world and Non-Physical a better place. Please understand I’m NOT saying that this means that animals like being hurt, or mistreated it does mean that they have a “Christ-like” focus on the bigger picture where they see all the beings in their lives playing a part to help their soul contract come into being. Their natural way of seeing “death” is as something to be celebrated a “job well done” kind of mindset, it will always be a symphony of incredible beauty, perfect timing and celebration.

As humans our natural way of feeling about reincarnation and transitioning is the same as the animals, we come to this plane knowing the truth about both and not fearing either which is our natural way of thinking about the subjects. But over time and listening to the fears from society we begin to fear things that we shouldn’t, for what we don’t understand we generally fear, instead of trusting. Animals are wonderful teachers for compassion, honesty, love but they are also amazing teachers on how life truly is and how it is to be lived, they have been my guides for life as well as for “death” they’ve opened my eyes to unlimited possibilities and untold acts of kindness, they have expanded my concepts and broken down the barriers of a societal limitations. They’ve taught me that nothing is impossible and shown me how to live with grace and (should the time come) how to transition with it as well.