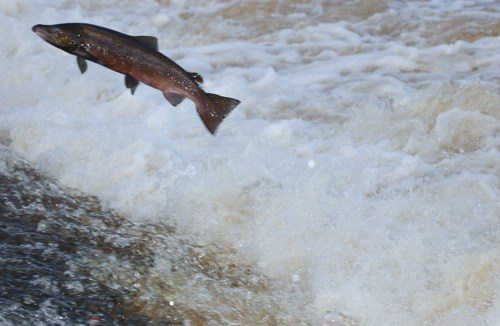 In my previous attunements with Reiki Fur Babies, I was told by the ancient tribal elders that what we were doing was helping to heal the Medicine Wheel. In attuning the Wolves & Coyotes I was shown what I thought to be a Medicine Wheel was actually a Universal Spiral. It was an incredible amount of information that I’m still processing! It challenged my way of thinking about the Universe in ways that life never had been before. Read more here…

What I also learn is that the healing began with the Wild Mustangs (Earth) and that the Eagles (Air), Wolves (Fire) were all pinnacle parts to the Universal Spiral healing.

I also learned that the last would be Water represented by Salmon and the other Fresh Water Fish. As I said in my other posts the numbers seem to wonderful play a part in what the outcome of the attunements are. The following is from the Angel Numbers website

When I began to attune, I did it they way the Big Cats showed me while I was attuning them; using my heart chakra, instead of my hands. I immediately saw the Ancient Tribal Elders gather, there was one each of us Ming, Candy & myself. Then I saw all of these fish in a huge river the Salmon were swimming upstream and the others seemed to be in a frenzy excited about the attuning we were doing. Then there was a rippling like water around my neck, it gave me chills.
As I sent I received that the reason this was the last attunement of the Spiral because this one would be broaching the gap of healing. Those who take the flesh of the fish will receive the healing power of reiki, the fish will be passing on the healing not only to their kind but to those who eat them as well. This would differ from Deer and produce much more healing being done on the planet because unlike Deer fish are more commonly used as food not only by people but by many forms of wildlife. Healing would not be the only thing gained, but those who wish it, could take on the attunement as well.

Then Salmon came through with this message…
“We do not mind if you par take in our flesh, we just ask that the sacrifices we make be acknowledged, respected and thanked. You need to be more aware of who your food is and the sacrifice that was made to bring it to you. The acknowledgment must not be much, a simple thank you but it will make all the difference it turns the food that you eat into a blessed act.”
Then I saw the Fish jumping out of the water, they were in total joy over what was happening, the Ancient Elder Ancestors were on the land, dancing, and singing and smiling. I had finished sending to the North, East and South and then I moved to the west in the direction of California where Ming & Candy and I always meet up. I got this sense of perspective about all the incredible things that we have done together in just a few months and the incredible hugeness of the light work that we and others had been doing.
Then suddenly I felt the lightness of this attunement, you would think that an attunement that was healing the current and future fabric of time (The Medicine Spiral) would feel, I don’t know BIGGER! But then it made sense, it’s exactly the way it was supposed to feel with all the attunements that had come before, like putting the last piece into a puzzle when all the others had been do much more challenging to find. It felt not like a boom, but more like the next logical step to happen, and with THAT knowledge it did become big.
I felt the Medicine Spiral becoming complete, it was a clicking into place and a coming together of the 4 elements Water, Wind, Fire & Earth. I heard stone grinding against stone, slowly at first but then gradually picking up momentum and when it did the grinding became less and less and disappearing into a chittering sound and then silence. I was hearing the Medicine Spiral beginning to work fully again; and then spinning until it reached above the speed of sound rate. The Elders told me that this was a sound that very few had ever heard, and because of what we had done it wouldn’t be heard again.
Goosebumps traveled all over my body when they told me that. The Ancient Tribal Elders then said….
“With the Medicine Spiral spinning perfectly again, we are now in a new era of cooperation, cooperation between the species, between the planet and those living on her and for other planes and worlds as well. For those who choose to join in this Era of Cooperative Collaboration you are most welcome! You must do something however, you must make raising your vibrations THE most important things in your lives. Raise your vibrations up! Make that the first thing on your minds above all else. More important than family, houses, money or anything else you can think of to put in front of it, for those things will all be ok when you raise your vibrations up, they are all automatically cared for. But what you gain is better than anything else, what you gain is that you make your connection to Divinity stronger! It is also opening you up to new worlds, new possibilities, and more wisdom than you have ever had before. The Spiral is spinning now, and it has it all the things that have brought you to this moment, when you raise your vibration you will see all the things in this spiral, past present and future, in a whole new enlightened light. This ability can only be achieved through the raising of the vibrations of the beings of this planet, it will make those things you think SO important now, blur in comparison!“
“For those who choose to stay in the mindset of separation that separation will only become more deeper and more expansive to you, but when you are ready you will always be welcome.“